After 40 years of enduring humiliation, Arabidopsis thaliana, a humble grass, has finally stepped onto the international stage and become a hot “academic star”, and it will continue to shine on the stage of scientific research.

The use of Arabidopsis for scientific research dates back to The German botanist Friedrich Laibach. In 1905, Laibach was studying for his doctorate, observing and analyzing chromosome numbers in plants.

So Laibach collected plant samples from Bonn, where his lab is located, and his hometown of Limburg, including arabidopsis thaliana. Perhaps because arabidopsis was so obscure that taxonomists at the time had not systematically studied and classified them, Laibach devised a method of naming them after the place where they were collected.

The first arabidopsis ecotype to be used for scientific research was named Limburg because samples were taken from his home town of Limburg. 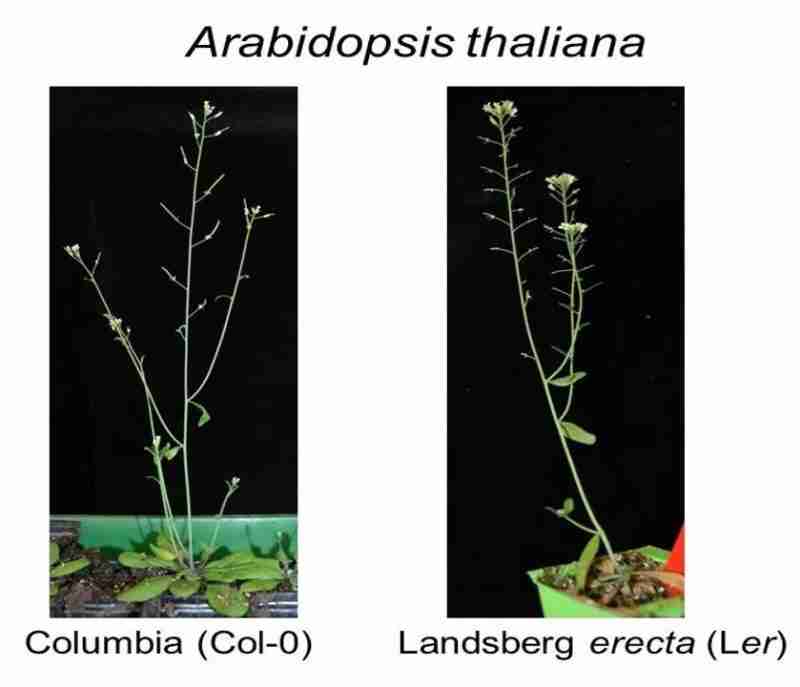 In 1957, Redei used X-rays to mutagenic Landsberg seeds, screening for mutants of interest. The first mutant they screened was Erecta, which was shorter but more robust. Redei believes that the specific phenotype of ERecta may benefit subsequent studies and has published erecta in an article.

During mutant screening, Redei found that Landsberg was not homozygous, but was probably a mixture of multiple lines. So Redei selected one from the unx-rayed Landsberg population and established a new homozygous strain for subsequent studies. Redei named the new strain Columbia, following Laibachs ‘rule of naming the site of discovery.

In 1959, Willem Feenstra, a plant biologist at the University of Roningen in the Netherlands, visited the Redei lab and took away some Landsberg Erecta seeds for his own research. Since then, Landsberg Erecta has blossomed in European laboratories and become the dominant arabidopsis strain in Europe. Redei continues to focus on Columbia.

Over the next two decades, interest in Arabidopsis increased and more research was conducted. In the 1960s, in order to promote cooperation and exchange among Arabidopsis researchers, the AIS (Arabidopsis Information Service) was established to summarize the latest research progress of Arabidopsis and communicate the problems encountered in the research every year.

In 1965, the first International Arabidopsis Congress was held in Gottingen, Germany, attracting 25 researchers from around the world. It is worth mentioning that AIS later developed into The famous TAIR (The Arabidopsis Information Resource) database.

Seeing the growing interest in Arabidopsis, Redei is stirring again. He decided to reiterate Laibachs ‘1943 proposal and published an article in 1975 entitled Arabidopsis as a genetic Tool, repeating Laibachs’ claim more than 30 years earlier that Arabidopsis was suitable for genetic research. And again called for arabidopsis as a model plant. But there was still no sign of him.

The breakthrough in establishing Arabidopsis as a model plant did not come until the early 1980s, when several high-impact studies were published.

In 1985, Meyerowitz EM and Pruitt RE published a paper in Science on Arabidopsis Thaliana and Plant Molecular Genetics, Reiterates the advantages of Arabidopsis proposed by Laibach 40 years ago and Redei 10 years ago for genetic research, and calls for the establishment of Arabidopsis as a model plant for the third time. Unlike the previous two, this proposal was generally accepted.

At this point, after 40 years of tolerance, Arabidopsis, as a model creature, officially stepped on the international stage and started its brilliant “academic career”. 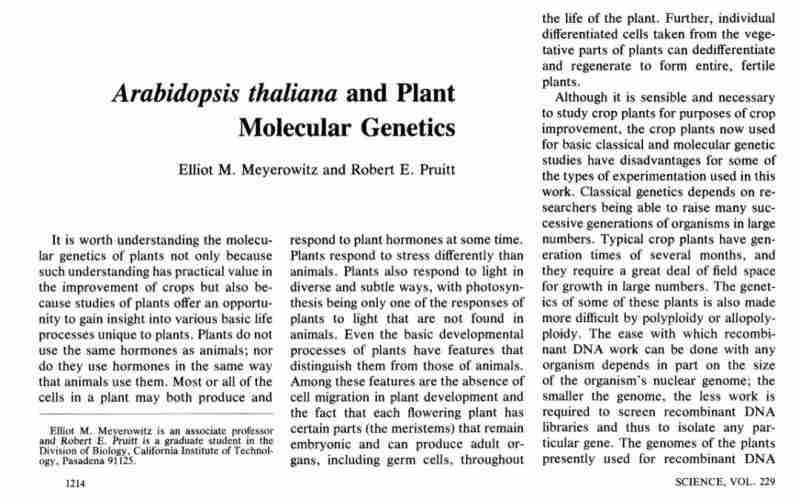 Fight against your own men

For the next decade, Landsberg Erecta was the star of arabidopsis research around the world, thriving. While Columbia is still a “nobody”, struggling in a few American laboratories, it probably never dreamed that it would have the chance to become the ruler of the Arabidopsis kingdom, and that its descendants would be everywhere in the world.

Genome sequencing technology developed rapidly in the late 20th century. In 1996, arabidopsis thaliana was selected as a model plant for sequencing and annotation of its genome, so it was necessary to select an ecotype as material. Although Landsberg Erecta was widely used in biological laboratories around the world at that time, it was not the most suitable material because it had undergone X-ray mutagenesis and contained some unnatural mutation sites. So the scientists reluctantly gave up their love and replaced it with homozygous natural ecotype Columbia.

In 2002, the arabidopsis genome represented by the ecotype Columbia was published. Subsequently, Columbia was selected by the SALK Institute for construction of genome-wide T-DNA insertion mutants. These two huge projects directly established and consolidated Columbia’s dominant position in the Kingdom of Arabidopsis and became WT (Wild Type) that we often see in major journals.

Since then, Landsberg Erecta, once the “hegemon”, has been in decline and has never had a chance to recover. And this is all because Redei originally received Landsberg from Laibach that was not pure. It makes us sigh, once again, at the impermanence of the world.

1996 – today natural history of a thaliana

Today, Arabidopsis has permeated every aspect of plant biology. Many areas of research have been pioneered in arabidopsis thaliana. As of 2015, there have been 54,033 academic papers with arabidopsis in their titles, covering 406 biological fields, and numerous other papers using arabidopsis as experimental material, according to incomplete statistics.

The study of various biological processes in Arabidopsis is the most detailed and in-depth. When we study a subject, the first question that comes to mind is “What is it like in Arabidopsis?” Today, Arabidopsis thaliana is the gold standard in plant science.

The gold standard for research

Reviewing the “struggle history” of Arabidopsis, it is not difficult to find that the road of scientific research is not plain sailing, but zigzagging forward in the constant return.

In the final analysis, scientific research is still subject to human beings. Wherever there are people, there are rivers and lakes. Inevitably, some narrowness and dark side of human nature will be mixed in scientific research, which often hinder the development of science and make us take many detours.

However, the advance of science is unstoppable. Truth may sometimes be temporarily obscured by dark clouds, but it will shine again one day.

Why is Arabidopsis a good model organism? After 40 years of enduring humiliation, Arabidopsis thaliana, a humble grass, has finally stepped onto the international stage and become a hot “academic star”, and it will continue to shine on the stage of scientific research. As a “master key”, Arabidopsis will also open more doors to the mysteries of life and lead us to appreciate the magical and wonderful life world.